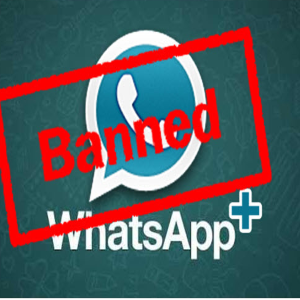 WhatsApp, a renowned instant messaging app known for its user statistics of breaking the 700 million users ceiling has disassociated itself from WhatsApp plus, a modified version of the app which was not developed by the original Company.

This is because the modified app violates the code of conduct and term of services and legal conditions of the WhatsApp application.

“WhatsApp plus has not been developed by us and we have not authorized it. We have no relationship to them or give them any support. Please be aware that WhatsApp plus contains source code which WhatsApp cannot guarantee any safety for your private information being passed to third parties without your consent”, said the official WhatsApp FAQs page.

This violation of rights has led to temporary ban on many WhatsApp Plus users and tech geeks across the globe for a period of 24 hours. According to the Company, WhatsApp does not approve users accessing third party clients like WhatsApp Plus instead of the original WhatsApp messaging app.

WhatsApp Plus has garnered popularity among users because it allows users more freedom to navigate the original WhatsApp by enhancing ability to customize their original WhatsApp experience.
Having purchased the original WhatsApp instant messaging app for a whooping $22 billion, current owners Facebook have filed claim to cease the usage of WhatsApp Plus which in turn has affected third party apps like WhatsAppMD which has also faced the ban.
Consequences of this rights violation has led to disconnection among users and the removal of the modified version from the Google Play store.
The users of WhatsApp Plus app are facing a hard time in waiting for the ban to end. However, the official WhatsApp has indicated plans of redevelopment to the app to suit the needs of their users.

0 0 0 0 0
Previous : Is It Worth It To Pay For Music Streaming Services?
Next : Paying more on your mortgage will save you money

I will defeat you in 2022 presidential poll, Ruto tells rivals

Get Etaarifa News straight to your email.